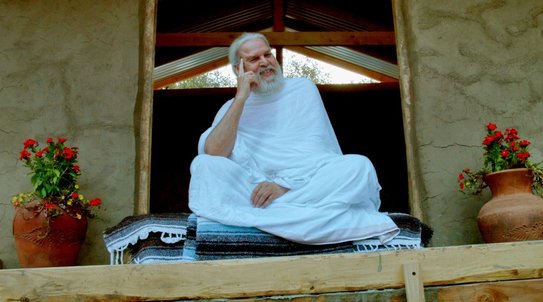 The mystery of how to know absolute Truth- to realize THAT Supreme Brahman- has been inspiring saints, sages and seekers alike over the centuries. One young Prince, born into an Indian family of philosophers and rulers, chose to renounce title, wealth and worldly comforts in pursuit of this Truth. Following his spiritual search for Truth, he traveled many thousands of miles over the hot planes of arid lands and icy summits of the Himalayas. He endured hardships inconceivable to most people. From this journey, he emerged as Sri Svami Rameshwar Anand Giri Purna, having acquired the ‘Fullness of Wisdom’. “Purna” is a Sanskrit term meaning Whole, Full and Complete.

This great son of India and one of the most inspiring spiritual leaders of our time, His Holiness Sri Svami Rameshwar Anand Giri Purna, Acarya Mahamandalesvara, PhD, was invited to establish an organization to disseminate knowledge for the benefit of humanity. WSS and VAS, meaning essentially open to all directions, were established in India and the UK as a platform to launch activities and programs in furtherance of the message. Under Dr Svami Purna’s guidance, centers and branches were later developed around the world. His teachings – going beyond geographical divisions, beyond barriers of cast, creed and race – are Universal.

Dr Svami Purna has advised and guided a wide range of people all over the world from Prime Ministers, Presidents, leaders and diplomats to business professionals, students, musicians, housewives and doctors to saints, sages and pundits. One of the first Prime Ministers of India said of Dr Svami Purna that, while there are many gurus who have found fame and success in the West, He is one of the very few who are also greatly revered in India.

Given his broad educational background and rich life experience, Dr Svami Purna is able to bridge philosophies and studies of the East and West. He was educated in Europe and India in medicine, philosophy and psychology in addition to the Vedas and spirituality. Dr Svami Purna is also a Sanskrit master and scholar. His mastery of the six schools of Indian philosophy and the Eightfold Path of Yoga has earned him the title Vidya Vacaspati, Lord of Learning. Dr Svami Purna has taught philosophy at various universities and institutions in North America and Europe, as well as other parts of the world including India. He continues to conduct seminars and retreats where He generously shares His timeless wisdom and inspires seekers – young and old – to find true happiness and fulfillment in their lives.

Close associates and devotees often refer to Dr Svami Purna simply as Svamiji. Over the years, Dr Svami Purna has been honored with various formal titles representing His achievements and qualities. Here are some examples: